The next few months will be busy ones for The 109s. Our second album, Hollow Point, is due to be released, and contains 10 songs of which I am intensely proud. The complexity and power of the music far outstrips that of our first, eponymous album, and I am quietly confident the songs will be well received. 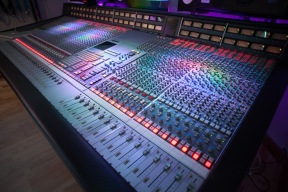 Meanwhile, the new line up of the band is preparing to go back into the studio to record six new songs for our third album. Which brings me to the title of the blog post.

Back when I was in my early twenties, it seemed to make perfect sense to behave badly wherever I went with my fellow musicians: dressing rooms were trashed, other bands insulted, cruel practical jokes played on other band members, and – no matter how expensive the studio – I was nearly always intoxicated whenever I came to record my music.

This was partly due to my priorities back then being drugs and rock and roll, with sex a very distant third. For some dumb reason, I imagined lashings of alcohol and cocaine would somehow improve my performance when recording in the studio – make it more authentic, if you will – when in actual fact, all it did was slow my fingers, and make guitar parts I should have nailed in a single take last for hours.

I now realise how stupid this was. The fidelity of the recording process painfully exposes even the slightest mistake, and when I listen back to recordings I made in the ‘90s, I can hear how I am just barely stumbling through each song rather than laying down the scorching performance I heard in my addled mind at the time.

Things are very different for me now in the studio.

For starters, I am teetotal, which improves my concentration and means I never settle for second best when I am doing a take. On days when I record, I get up and practice my parts for hours before I go to the studio and once there, I can play for hours without a break – six hours non-stop is my record.

Keith Richards was once asked what the best drug was for creating music. He paused for a moment then said, ‘A cup of tea and a clear head’. As per usual when talking about music, Keef is absolutely right.

Here is an example of my music back in the ’90s.