School. College. Adolescence. They’re tough times for those of us who don’t fit in.

I was always a loner: I discovered books – the first true love of my life – early on, and have read obsessively from the age of four. This meant I have always preferred the company of books to that of most people.

Around 10, I discovered roleplaying games – Dungeons and Dragons, Warhammer Fantasy and Call of Cthulhu – so I became both a loner and a nerd. Added to this, I was skinny, gangly, unattractive, useless at football, and had developed a love of poetry, which was something I kept very quiet – admission of that at the comprehensive school I attended would have bought me a one-way ticket to the bramble patches at the school gate.

Academically, I was a disaster. I didn’t (and don’t) like being told what to do – especially when the “what” doesn’t interest me – and consequently spent most of my time secretly reading books unrelated to the subject matter of the class underneath the table.

Then, at 14, I decided school bored me so much that I began to bunk off three days out of every five – I figured my time was better spent at home reading, or painting my model orcs and trolls, or walking through the woods to Aldershot’s second-hand record shops in search of LPs by Hendrix, The Stones, The Doors, Led Zeppelin . . .

I scraped four GCSEs – not enough to get me into Sixth Form, but my parents were both teachers, so strings were pulled and I was accepted.

Again, I didn’t fit in. Part of it was boredom – why would I want to study Jane Austen when I was already devouring Joyce, Kerouac, Yeats, Burroughs, and Rimbaud? – and part of it was drugs: at 16, I developed a taste for dope, LSD and speed, which meant I was shunned by most of my peers.

And that was fine with me, because by then I had discovered the second true love of my life: the guitar.

I started out with my Dad’s battered acoustic. He didn’t have much hope for me – after all, I’d already failed at everything else. ‘Show me you have the patience to learn the basic chords,’ he said. ‘If you do, I’ll get you an electric guitar in six months.’

Eleven days later, not only had I mastered all the chords, I was already knocking out the opening riff to Purple Haze. Dad got me that electric guitar the very next day.

A few months later, I helped to form my first band, Pretty Green . . . and then everything fell into place. 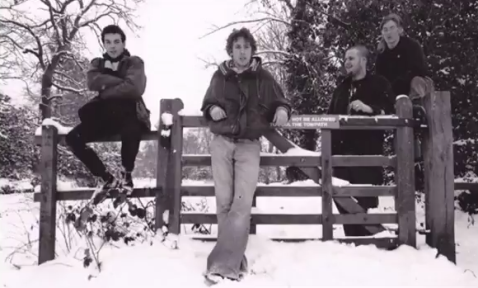 The band was a conduit to so many good things: self-respect, friendship, acceptance. The guys in the band were all between 19 and 21 (which is a huge gap when you’re 17) but they treated me as an equal because of my ability on the guitar.

Thanks to my obsessive nature, I improved very quickly, spending every spare hour of every day learning riffs and guitar solos by ear – and the better I got, the more I was respected. Soon I was jamming with other musicians who were in their late twenties, and I had a brief fling with a 27-year-old woman – no small achievement considering I was still a few months shy of 18. With music, I realised, I had discovered something that brought tangible results – the more effort I put in, the more I got.

I stumbled through the rest of Sixth Form and got three U’s for my A-levels, which is hardly surprising: I actually fell asleep in one of the exams, probably because I had been out gigging the night before or was coming down off a night of speed.

Which brings us to the photo above. They say a picture is worth a thousand words, but this photo I have included of Pretty Green says only two to me.

Given my cocky stance, you might be think those words are “arrogant” and “dick”. But it’s not arrogance in the photo: that stance is the result of pride and relief: the pride of an adolescent musician at having been accepted by guys who were way older than me; and relief at having finally found a corner of life where I really did fit in.

So, to all of you out there who also struggle to dovetail with life, I say this: Don’t worry what “normal” people think – follow your star and, sooner or later, you’ll find others with whom you fit in perfectly . . .