Five extraordinary musicians, all of whom were shit-hot singers and songwriters.

What could possibly go wrong?

Everything, unfortunately, in the case of Moby Grape: first, there was a disastrous decision by the record company to release FIVE singles from their debut 1967 album simultaneously; then a bout of LSD-induced insanity saw band-member, Skip Spence, rampage through a hotel with a fire-axe in an attempt to kill the drummer.

This resulted in Spence being sectioned for six months – a trip (in both senses of the word) from which he never really returned. Even the album cover proved problematic when it was noticed that in the centre of the image one of the band was flipping the bird.

Luckily for music fans, all this happened after they had recorded their stunning debut, Moby Grape.

While most of their contemporaries in 1967 were churning out lengthy raga-inspired improvisations, Moby Grape kept to short, punchy songs that effortlessly mix pop, rock, country and psychedelia. 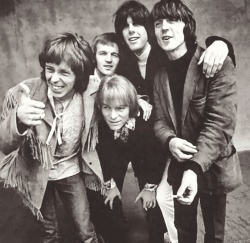 Their three-guitar line-up – which is always a tricky one to use, as the potential for muddying the songs is enormous – works perfectly: Spence chugs, Peter Lewis fingerpicks, while Jerry Miller’s fuzz-tone lead sears atop them, spitting out fills and succinct, dynamic solos.

The bass and drums are of a similarly high quality. As bassist and singer, Bob Mosley, said upon meeting the band: ‘I can hit anything up to a high C, and I play like a motherfucker.’ Wise words indeed.

The fact the band had five singers means the harmonies and backing choruses are rich, adventurous and exciting. So good were they, that Sam Andrews (he of Janis Joplin fame) was prompted to say, ‘Man, you guys are better than The Beatles!’

The songs on their debut demonstrate that these words were not hyperbole.

The album Moby Grape rocks, rolls, swings and seduces by turns; excellence of musicianship and invention ooze from every song, while the band make full use of their five singers: on some tracks there are three separate vocal melodies that weave in and around each other (and this in an era when bands were recorded live).

Tracks to watch out for are the rockers Fall on You, Changes, and Indifference, and the ballad 8:05; while the band’s magnum opus, Omaha, is quite simply one of the greatest songs to emerge from the 1960s, a powerhouse of driving rhythm and sublime vocals.

If you’re serious about music, you need to explore this forgotten classic.