For those outside the music business, a click track is an electronic metronome which ensures every second of the recorded song is played at the exact same bpm (beats per minute) as all the others. 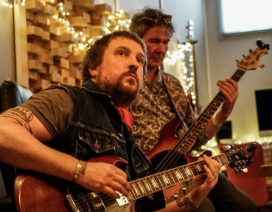 While this might sound a good idea, it is not. Rock and Roll music is not about exactitude, it is about groove and feeling, and if this latter requires a few extra bpm’s, then so be it. I can always tell when a drummer has played to a click track – there is a kind of plod to the beat that is unmistakable once you know what to listen for.

We tried practising to a click track way back when we did our first album, and our drummer, Steve (who has a superb sense of rhythm) only needed about 30 minutes to adjust to it.

When he played with the click track pinging in his ear, though, it suddenly didn’t sound like Steve: there were none of his playful fills, none of his swelling snare-work, none of his thunderous runs around the toms. How could it, when he was slaved to an electronic pulse?

We discovered that The 109s’ songs actually need a certain amount of elasticity in order for them to rock – by which I mean, some parts sound better played a few bpm faster or slower. So, we record without a click track.

But, click tracks CAN be useful in certain situations. Knowing that a certain section of music goes at X bpm and continues at that pace for 20 seconds means you can cut and paste all sorts of things into the songs that would otherwise take ages: tambourine, backing vocals, guitar lines, backward washes of cymbals – the list is endless.

What our producer, Jason Wilson, does is rather clever. We record without a click track – but he them imposes one on the music afterwards, by chopping each individual beat up and allowing each section to find its own natural bpm.

This is a win-win for us. Not only do we get to have a vibrant, rocking sound to the songs, we also have bpm counts for each section, so if we want to add an effect or some percussion, we don’t have to go in and do it for the whole song – we can do a few beats and then cut and paste.

You have never known true musical misery until you try to record maracas for a five-minute song – by minute one, the ache in the wrist begins; by minute two, the ache becomes pain; and if you even make it to minute three, the pressure on the wrist becomes so intense, it is like trying to have three lonely and inconclusive wanks simultaneously. 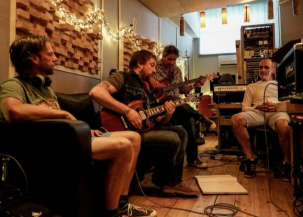 Anyway, Day Two began and ended well (there was a brief interlude halfway when my bafflingly ambitious and complex song structures caused some concern for the other musicians which had to be talked through).

Jason is now in the process of imposing the click track, which will take up the morning of Day Three, but hopefully I should be getting some guitars down this afternoon.