In this section, I list some great guitarists of whom you might not have heard. In each case, I discuss their styles, their most important work, and explain why I love their music so much.

Hazel is best known for his work with Funkadelic, one of George Clinton’s numerous projects that appeared under the P-Funk umbrella. Although Hazel was an accomplished funk rhythm guitarist, hanging behind the beat and delivering deliciously danceable chops and fills, it is his work as a lead guitarist that really grabs listeners.

Hazel played with a monstrously distorted tone, one that is so thick and rich it is constantly on the verge of breaking apart as he pushed the speakers of his amp to the max.

His lead style is very close to Hendrix’s – he uses a great deal of wah, and the infamous E7#9 chord is often present – but he never strays into sloppy plagiarism, and he was also capable of great subtlety – the song Maggot Brain consists of more than 10 minutes of Hazel playing with all the other instruments faded out. Legend has it that Clinton told Hazel to play ‘as if his Mother had just died’ and Hazel pulls it off perfectly with a performance that possesses an intense sense of melancholy.

Top Tracks: Maggot Brain, Red Hot Mama, Standing on the Verge of Getting it on

Kossoff was guitarist in the band, Free. Although his most famous song, All Right Now, is an upbeat radio favourite, most of Kossoff’s playing was tinged with a melancholy edge. He played a Les Paul strung with very heavy strings (his high E was a 0.11).

This gave his guitar a thick, throaty tone, yet he was also a master of string bends and had a distinctive and subtle vibrato. He was never a flashy, fast lead player, but his solos are so melodic there is no necessity for speed.

It is small wonder that the Rolling Stones’ most highly acclaimed albums (Let It Bleed, Sticky Fingers, and Exile on Main Street) all coincided with Mick Taylor’s tenure in the band.

Although he was only 20 when he joined the world’s biggest rock group, Taylor was already an experienced guitarist, having played with John Mayall (and thereby having to fill the footsteps of both Eric Clapton and Peter Green).

One of the most eloquent guitarists in rock history, his superlative skills as a soloist added a shine and polish The Stones’ sound had previously lacked.

Check out the solo at the end of Sway, the song I have embedded below (it is track 2 on Sticky Fingers) to hear what I mean. The solo contains no flashy runs or guitar heroics, but every note is perfectly phrased, building a foundation upon which Taylor moves towards a stunning crescendo.

Top Tracks: Sway, Shine a Light, All Down the Line

When a musician of the stature of B.B. King says, ‘He has the sweetest tone I ever heard; he was the only one who gave me the cold sweats,’ you know the guitarist is something special.

Mayall’s Bluesbreakers and was quickly recognised as more than a match for his more famous forebear. He was also reportedly the only guitarist who was not intimidated by the hurricane of Hendrix’s arrival on the London scene in 1966, when most other lead guitarists were staring in mute bewilderment as Hendrix began rewriting the book on what could be done with an electric guitar.

This anecdote makes perfect sense, as Green is the epitome of the ‘less is more’ approach for the simple reason that he had the best tone and vibrato of any British guitarist of the era – he did not need to play fast for the simple reason he could hit a single note and squeeze absolute perfection from it. 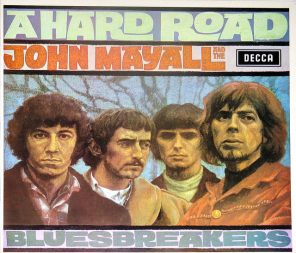 Although he was a dyed-in-the-wool Blues guitarist, when he formed his own band, Fleetwood Mac (named for his rhythm section), he experimented with a harder rock sound, and some of his riffs and songs – Oh Well; Green Manalishi; Black Magic Woman; Rattlesnake Shake – have become staples.

He was also capable of producing very gentle, subtle music: the instrumental, Albatross, being the most obvious example, together with songs like Man of the World and the second part of Oh Well.

Mental health problems plagued his career, which is why he has dropped off the radar for many guitarists, but anyone who favours tasteful lead guitar played with grace and subtlety, will quickly realise Green is quite possibly the best guitarist Britain has ever produced.